Despite the deafening roar of cynicism that announces our unfolding obliteration, existence is pretty awesome and most of the evidence supports that.

The Parable of the Pancakes

Two wise men did come to dine within a Village Inn

The den of antiquity and patriot of pancakes

Who was busying himself with an act of tidiness

The first wise man saw that the second wise man

Was dipping his napkin in butter

And using it as though it were a cleaning solution

Upon discovering the success of the solution

The second wise man did cryeth out – “Eureka!”

“The butter cleans up the syrup.”

Hearing this, the two wise men were enlightened

The Parable of the Pancakes originally appeared in The Malcontent’s Manifesto.

You cannot swing a stick without hitting a doomsayer these days. Not that the behavior is new. Armageddon seems to be the most pervasive virtue signal throughout history. It is just that there are more of us now and our environment is saturated with a media frenzy of eschatological opportunism.

Even the high priests of materialist science have joined the cries of the end of times, as if this untestable prediction is any more relevant than when made by other kinds of priests citing an ancient book.

So how does this kind of Chicken Little-ism continue to be perpetuated? 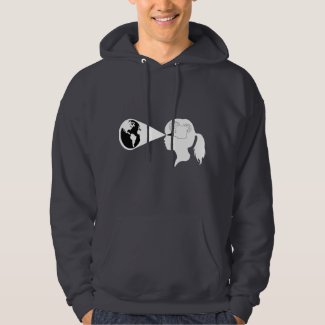 How does cynical fatalism & apocalyptic pessimism become such a persistent virtue signal?

Intelligent people have always struggled to make sense of what seems to them a mass of willful human ignorance. As such the intelligent often are often cynical, Or at last would appear to be to those who did not understand the complexity of their criticism. A further consequence of this is that intelligence and cynicism are often equated.

When people believe cynicism and intelligence to be equivalent and want to appear as intelligent, whether they are or not, it becomes expedient to signal cynicism, for the simple reason that it is far easier to be cynical than smart. And so cynicism becomes a signal for the virtue of intelligence. But as it requires no intelligence to either be cynical or fetishize it by signalling, anybody can do it.

At this point cynicism begins to hold a social function in which it affirms and validates members of a group of signal-sharers. Competing signal tribes begin to escalate the intensity of their signals to drown out the others. And this feedback loop grows into a situation in which almost everybody puts on blinders against any evidence that does not confirm their bias towards our inevitable destruction.

However there are massive amounts of evidence that the world is actually an incredibly beautiful place in which even the greatest of disasters often give rise to something wonderful.

The epidemic of abusive sexual behavior that has marked the entirety of American history is being exposed and responded to at long last, likely a result of the election of Donald Trump. I think the fact that a man with a known history of sexual abuse could achieve the highest ranking position in our society really rankled a lot of women and inspired them to start sharing their own stories of abuse so as not to feel so powerless.

While there is no doubt that Trump has tilled up massive amounts of dormant racism, hatred and ignorance that most of us had thought somewhat extinct, if it also brings about the end of such emboldened sexual abuse and serves as a cautionary tale against handing power to narcissists in the future, it may well be worth it.

It was recently discovered that climate change has assisted in the repair of the ozone layer. And that dreaded global warming might get a cooling assist from the earthquakes and volcanoes that are predicted for 2018.

It was also recently discovered that modern human activities, which doomsayers are quick to connect to our impending annihilation, have helped to created a second magnetosphere which will protect us and the electrical systems we have come to rely upon from solar radiation events.

[I will continue to add to this article as more ‘natural countermeasures’ pop up.]
{Will the sinking of the seafloor ease coastal flooding?}

The butter doth clean up the syrup indeed!

If you continue on with this mindset, and try to gather evidence that existence is awesome even when fraught with comic tension that can sometimes get a bit uncomfortable, you will find much of it. Growing pains are not evidence of the end. They are harbingers of growth, adaptation and evolution.

It feels good to score dopamine hits via cynical virtue signals. Feeding into the nihilism that underlies modernity has its rewards. But it is also irrational and tends to traumatize rather than inspire. If you think exchanging fatalistic symbols for social status is worth a lifetime of self-righteous dread, horror and anxiety – well, I hope that works out well for you.

However if you wish to walk through your days in admiration of the beauty, mystery, possibility, humor and joy all around you then drop the Chicken Little act. Even if the sky does fall, it will probably cause something totally awesome to happen.

One thought on “Nothing’s Fucked Here, Dude – The Parable of the Pancakes”