I recently wrote a piece of fiction – happy – in which an artificial intelligence and one of its creators question the value of human intelligence. The basis for this question involves the goals of humanity. Is intelligence itself an ends, or just a means to another end? And if we decided that our goal was actually happiness, could intelligence eventually become an impediment to this goal?

As it usually goes online, rather than reading the piece itself, many people decided to just respond to the introduction I had written for the posts.

“What if endless growth of human intelligence is not really the best path for us? What if it has only been a method of achieving happiness, but has come more and more to stand in the way of that? Could there ever be solution?”

The responses to that were generally just snarky insults. Reactionary rejection by those who did not even take a moment to read the piece, let alone genuinely consider the idea and give it a thoughtful response. It was just pure signalling for the virtue of intelligence. And yet the fact that those individuals were unable to entertain the idea of employing intelligence to question intelligence itself says something about their dedication to intellectual rigor.

There can be almost no doubt that intelligence has provided endless value from a utility standpoint. As a tool for producing results of many kinds, its usefulness is almost beyond question. But as a dogmatic virtue or as an activity unto itself, it may not hold the same value.

In my last article I questioned the validity of the Eight Circuit Model of Consciousness. In discussions those who are attached to that model continue to reference its usefulness, but have provided no clear product of that usefulness.

The 8CM has never fed a starving person, thwarted a war, underpinned a new technology or overthrown oppression. The only thing which it can be said to have done, as is the case with all abstractions, is to entertain those who are entertained by such things and spur further abstraction. The only function of such an abstraction seems to be to breed more things like itself and reinforce its own usefulness.

The state has already trampled all over you. They steal from you and keep you under the perpetual threat of violence. They spy on you, prohibit your private healthcare decisions and essentially own your ass on paper.

Abstraction enthusiasts seem to be working from the same logic with their models. You have to have models because models.

So then the next argument would be that models make us more intelligent. That by viewing experience through multitudes of models, we can learn more about what that experience really is. Except an experience is not something outside of itself. An experience is the understanding of an experience. There are no magical Easter Eggs underlying our experiences. There is no scoring system and no end game.

Unless you wish to gain control over other peoples minds in some way, models of abstractions are useless. Like all ‘truths’ they are a function of power. They are interpretations which have inherent agendas. And the agenda, even if only implicit and unacknowledged, is conformity to the model. It is behavior management.

“Here is how reality works. Now you must act within its inherent systems of logic or be a no-good shit.”

When somebody shares a pet model of their own with others, or one they subscribe to, the hope is always that the person will be transformed in some way. Which itself comes with the insinuation that the person is deficient and requires the kind of change offered.

And as a writer, I will not deny doing this myself. If I wrote without the intent of changing minds, this would all be locked away in notebooks to be burned at my funeral. I am not accusing other model makers of doing something I am in denial of. I fully realize my complicity. The chief difference between myself and most others is that they are doing so to add another whirly-jalopy to the playground of abstractions and models, where my intent is to clear some of that endlessly piling junk out of the way so we can see what is left without it.

I suspect that what we would find is that most of our problems (or their causes) were initially created as solutions, and that without viewing reality as a problem to be solved, it might be more enjoyable to actually experience. 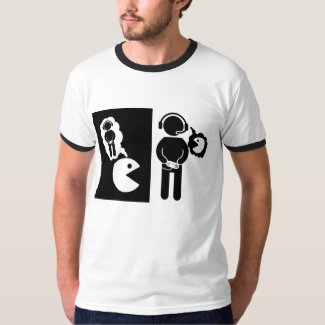 The Aneristic Principle encourages endless abstraction and modeling for its own sake, as such behavior builds walls which minds can be herded through. However the Eristic Principle would suggest that every abstraction or model is an attempt to apply order to chaos, which then results in an increase in apparent disorder.

Intelligence is useful for solving problems, but the downside is, in the absence of a problem to be solved, intelligence seeks to create them to keep itself busy.

And there lies the danger. Harmony is threatened by a compulsion to find disharmony. In this way our intelligence could become a barrier to our happiness. If we prioritize our intellect and its ability to abstract above our experience and happiness, then intellect becomes our enemy. When the only usefulness of an application of the intellect’s is to validate abstraction and intelligence, it becomes a closed system. Entropy ensues.

At this point I would like to confess that I myself have been guilty of the mindless glorification of intelligence. One need not even look all that far back at my writings to find instances of this. I am not viewing this problem from the outside. I am not suggesting some objective stance. My final proof is completely experiential.

Since taking steps to distance myself from abstractions and models, with such compulsive rigor, I have become much happier. I hope to continue elevating the joy of my experience by removing even more abstractions and questioning my intellect when it tries to steal the show all to itself. And I hope that instead of endless argumentation, some of you are just reading this and thinking about it and doing your own experiments.

Here is one to start with. Do not respond to anything you read this week. Not even this. Just think about it. Next week, comment on everything as soon as you have finished reading it. Removing other factors, at the end of the second week, try to remember which week you were more calm, peaceful and empathetic.

The two weeks after, do the same, but instead of comments, try avoiding models, abstractions and the willy-nilly application of reason to everything – and then immersing yourself in them – and see which week made you happier.

What do you really want in life?