A consequence of being a language using species is the tendency towards abstraction, for better or for worse.

One day Sir Isaac Newton was sitting under a tree when an apple fell. In that moment he was hit with a flash of pattern recognition. What goes up must come down. And thus the concept of gravity was introduced.

It is a familiar story, one which every child learns, and which even adults who have no particular interest in science or history can basically remember. It is the cornerstone of modern science and classical physics. It was the beginning of the human endeavor to formulate the laws of nature.

Just about every protest or question you will have while reading the following article has been addressed previously in – Philosophical Idealism & the Spook of Solipsism – so you might want to read that before moving on.

Today when we consider nature, there is no religious connotation. But in the time of Newton and throughout the beginning of modern science, that was not the case. Nature was not some set of ephemeral rules that formed themselves as a consequence of the big bang. Not just because the big bang had not yet been hypothesized and wouldn’t for a few hundred years, but because the laws of nature were not considered to be absolutes arising purely from chance.

The early scientists were not, as are many scientists today, concerned with secular explanations. They were invested in the ideology which sprung up from the Protestant reformation. The mysterious universe of Catholic theology was deemed insufficient. If man were to align his interests and behaviors with the will of God, they reckoned, it was necessary to learn the rules by which God maintained His cosmic property.

When Newton described gravity, he believed that he was describing one of these God-given rules, and he would have protested heavily if he knew that hundreds of years later the functions of the divine were being bestowed on some ephemeral abstraction called ‘nature’.

Of course he would have protested even greater if you told him that gravity itself was nothing but another abstraction culled from the deterministic logic he shares with modern science.

Prior to the ‘discovery’ of gravity no question had arisen for which it was the answer. Gravity was not the solution to any known problem. It served no practical purpose and did not fill any existing gaps in human knowledge. And it did not tell us anything we did not already know. What goes up must come down, most of the time, anyway.

Nobody was jumping off cliffs because they didn’t understand this. It was an essential part of human experience that needed no explanation, and no cosmic cause.

If viewed from a narrative perspective, the functions Newton accredited to gravity needed no explanation. Nothing else in our experience would have made sense if everybody and everything was just floating nilly-willy everywhere all of the time. Staying stuck to the ground just basically makes it more practical for human beings to interact with one another and their environment.

Think of reality as a story, a story in which you are a character exercising free will in order that the story continues to be written from within. If you were to write the human story would there be any reason to have everything flouncing about in all directions? Would you feel the need to explain why objects in your story didn’t just go sailing through the air, or would that seem to burden the story – what writers call too much world-building.

Now consider this: There is no such thing as gravity. 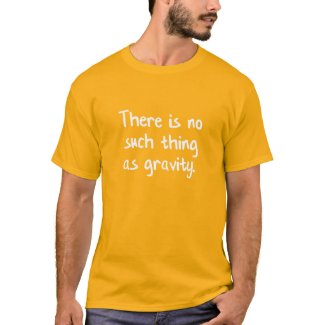 There Is No Such Thing As Gravity T-Shirt

While we all have consistent experiences of gravity, nobody experienced gravity before Newton. Because nobody questioned why they weren’t unstuck from the ground. It was only after the concept of gravity had been introduced that anybody could have been expected to experience gravity. Without the idea and the word, nobody had been able to experience it. They were not experiencing being stuck to the ground, either, because there was no reason to have ever questioned why they were.

Gravity is an abstraction. And it is not alone. Almost everything humans pride themselves as having attained as knowledge is equally an abstraction. We are not discovering reality or nature or laws, but creating them to enrich our narrative.

Abstraction is not pointless, though. Through it we are able to experience a sense of change. It is a creative tool that allows us to increase the complexity of our story. But abstractions are no more the cause of our narrative than words are the cause of Dorothy going to Oz.

A few hundred years after Newton, another scientist named Einstein reformulated the gravity abstraction. His gravity was not compatible with the old version. Nonetheless, both gravity abstractions are useful in different ways. Classical physics is considered in every engineering project undertaken today. Einsteinian physics are considered whenever quantum-level or cosmological activities are taking place.

So are both of them true or untrue? Or as mere abstractions, are they neither true and untrue, and only useful when applied to a specific category of further abstraction?

Imagine if you could talk to a fish. Would explaining to the fish that it is wet be useful to it? How would they understand what it means to be wet when they have never known anything else? And how could that concept be used to change the fish way of living?

Probably not at all unless fish were a language using species. Language encourages abstraction and profits (adapts and evolves) from its use.

As a human being you exist within a mental sea of language-derived abstractions. Even now as I am telling you that gravity and everything else you think is ‘really real’ is just an abstraction that doesn’t exist outside of itself, like the fish that is told it is wet, you are probably thinking that I am either stupid or insane.

That is what happens when somebody steps out of line and is no longer hypnotized by the same abstractions as everyone else.

If you happen to be hypnotized by the right abstractions at the right place and time, they will call you normal or a genius. But if your abstracted delusions of truth don’t fit the zeitgeist you’re in, they’ll call you a fool or a loony. 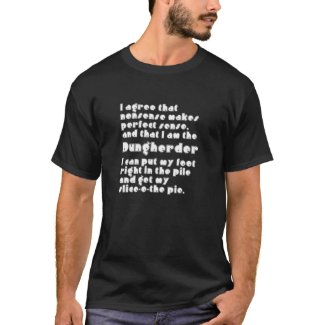 However, lest you think that this writing is itself an abstraction, yet one with no useful function, let me explain why abstraction can become problematic and should be recognized.

Have a discussion with any conservative, whether it is a Reagan-era Republican, a Kek-worshipping alt-right boi, or an anarcho-capitalist. At some point in the discussion they are going to appeal to natural laws. They will then use these natural law abstractions as a way of convincing you that their ideology is supported by the very nature of existence itself; much in the same way that Newton and the early Protestant scientists used natural laws in order to align themselves with God’s holy will.

This is the nature of all abstractions – to be used as an appeal in order to control the thoughts and behaviors of others. Not to say that this is always for the worst, but if you cannot conceive that this is happening, you become radically susceptible to suggestion and thus more likely to be deluded or harmed by it.

So the next time some slick trickster tries to get you to join their ideological cult by making you submit to “reality” because “gravity” – smile politely, nod your head and walk away and let them abstracturbate without you.